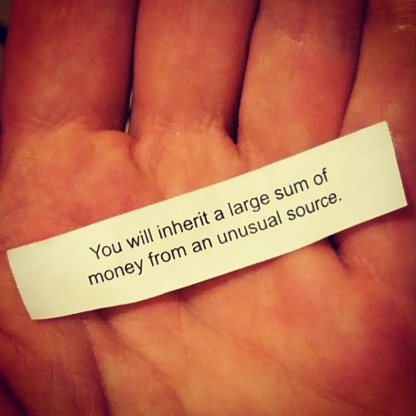 A little over one week ago, a fortune cookie told me, “You will inherit a large sum of money from an unusual source.” I posted a picture of it on Instagram stating, “I think this fortune cookie is trying to tell me I’ll be playing poker again soon.” At the end of the day, I made a wish and tucked it in the corner of my bathroom mirror, directly below a message of hope I’d scribbled to myself on the glass months ago: “Impossible things happen every day.”

Five days later, I found the opportunity I had wished for. I learned that Daniel Negreanu was going to buy one very lucky soul into the World Series of Poker’s Main Event. All I needed to do to enter was make a video saying why he should pick me in 30 seconds or less. The impossible had become possible.

I spent the next four days working and pondering what I should say. I could try to recall the dream I had that launched me on my quest to become a writer, artist, and poker player. I could boast that I believe I have the skills needed to go all the way. I could promise to donate a portion of my winnings and anything I crochet during the WSOP to charity. I could admit that poker helped me develop strength of character, patience, and the ability to endure bad beats. I wanted to say all of that (because it’s all true), but there wasn’t time.

So, I draped two of the scarves I’ve crocheted over the top of my gate and set out some of my art and vintage card decks on the ledge below to create a backdrop that would give a peek into the breadth of my passion for poker. Then, I used my video to tell Daniel three other honest reasons to pick me which I didn’t think anyone else would say. First, I stated my belief that I can get other women interested in the game. Next, because I’d seen a video suggesting that WSOP players are getting too serious, I suggested I could help bring back the fun. (I’m often up for conversation and full of wit and puns.) Finally, I told him about my fortune cookie’s prediction.

I decided that the odds of anyone who’s entering the contest getting that same message right now are lower than the odds it will come true. I decided to accept it was possible that this time, for whatever reason, God sent me a sign in a cookie. I decided there were reasons beyond the ones I knew when I nicknamed myself the Gold Digging Grinder. I decided to believe that it might be my time and mentally prepare for the fact that my life could change overnight. I decided to let Daniel Negreanu decide if that cookie was telling the truth.